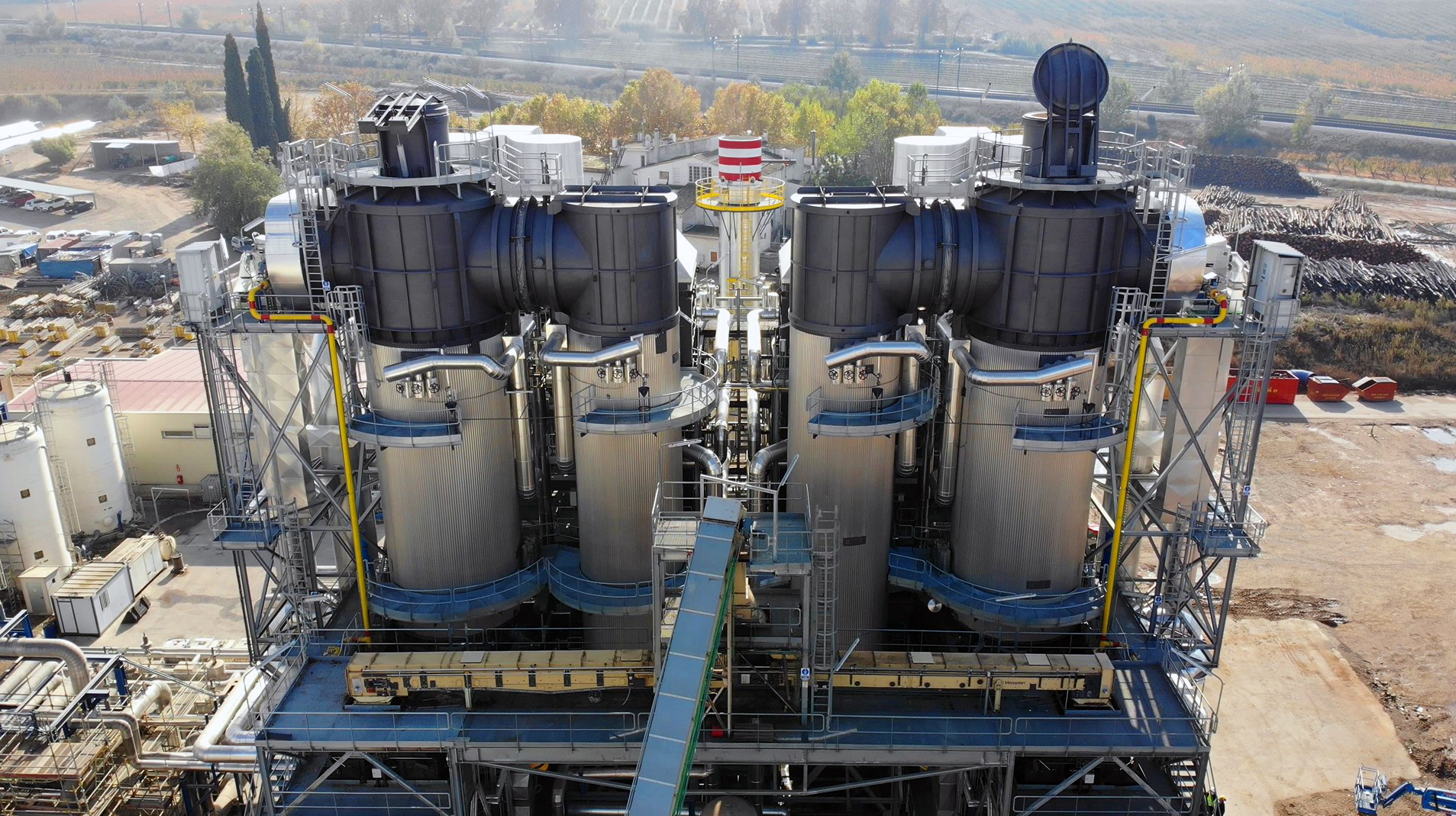 A biomass boiler would not be a great novelty in the face of the sustainability boom in the energy sector. However, developing a hybrid plant that combines biomass with solar thermal energy is. This is the milestone that Sugimat, a Spanish manufacturer of industrial boilers, has reached.

“It is a unique plant in the world due to its process conditions; it is the first to combine biomass and solar thermal energy through a field of parabolic trough mirrors,” the company says. Thanks to this hybridisation, the plant, located in Les Borges Blanques (Lleida), provides energy 24 hours a day.

The electrical power of the export plant is 22.5 MW. In other words, the plant can produce up to 22.5 MW of electricity with sunshine. If there is less radiation, it can be supplemented with biomass and at night or on very cloudy days, if it is produced only with biomass, up to 10 MW electricity can be produced.

“Given the conception of the plant, the priority will always be to produce energy using the solar thermal system, through the heating of the fluid in the parabolic trough collectors,” explains Xavier Mas, director of Sugimat’s technical and R&D service.
In the periods in which sunlight ceases to have an incidence due to transients (clouds, fog, rain, night, etc.), the biomass part enters the operation to heat the fluid through the boilers.

Until now, the industry has only designed boilers for biomass combustion with a thermal oil temperature below 325ºC, given that the fluids used cannot withstand higher temperatures, adds Xavier Mas.

Working at a higher temperature implies a higher performance of the turbine, which means generating “more electricity with less fuel, but also working with a more unstable fluid that withstands temperatures close to 400ºC”.

“This type of fluid had only been used in natural gas boilers, which is a much more homogeneous fuel with a more controlled combustion,” says Xavier Mas. He stresses that working with this type of fluid, called biphenyl, combusting biomass is what “has been a technological challenge“.

In less than a year, “a record time” and even more so in a general context of a global pandemic caused by Covid-19 that fully affected the final phase of the project, Sugimat designed, manufactured, installed and commissioned the two biomass boilers for Termosolar Borges plant. Both are fed with woody biomass and with a power of 20.5 MWt and already work in hybrid mode with a field of parabolic trough solar receivers up to 390ºC, “something that makes them unique in the world”.

The Valencian manufacturer also developed other elements of the plant, such as the heat recovery systems, the integral control system and the emissions treatment, among others.

Specifically, this plant has three general modes of operation: 100% solar thermal (which is applied when solar incidence is at its maximum); hybrid solar thermal-biomass (when solar incidence is not at its maximum and both technologies coexist so that the biomass part completes the heating of the fluid); and, thirdly, a 100% biomass mode for cases in which solar production is nil.

Both solar and wind energy have reached a level of development that makes them competitive with conventional energy sources. However, Alex Mas, Sugimat’s Business Development Director, explained D+I that the problem is “their intermittency, the lack of availability due to their dependence on natural phenomena“.

“Energy policies are trying to solve this problem by focusing on storage, whether in batteries or other systems, renewable hydrogen and hybridisation”. And in this sense, he adds, one of the advantages of solar thermal energy is that it can be stored thermally and produce electricity at night. In fact, this system is implemented in many power plants in Spain.

For this reason, Sugimat’s Business Development Manager stresses that a hybrid plant with biomass, such as Les Borges, would be “an alternative to thermal storage, but it would depend on the availability of biomass”. In this sense, he clarifies that “not every solar thermal plant is susceptible to being hybridised, as the price of the biomass, which is influenced by factors such how far away it is, is important for the viability of the plant”.

Thus, “although hybridisation responds to the problem of the intermittency of solar energy, it is not always the ideal solution for it”. In fact, he points out that the viability of the biomass plant itself will have to be studied, that is, from the price of the biomass to the cost of transporting it, among other factors.

For example, in Spain there are around 25 solar thermal plants without thermal storage, Alex Mas points out, and these are “susceptible to hybridisation”. In fact, Sugimat has already received interest from three companies to learn about its technology. Whether this is a future niche market will depend “largely on government energy policies, including the upcoming biomass auctions”.

In short, hybridisation of solar thermal energy with biomass increases the plant’s operating time by 150%. In this way, an unmanageable energy asset such as a concentrating solar power plant becomes manageable, as it can continue to produce electricity at night or on sunless days.